CRESTVIEW, Fla., July 7, 2019–A Crestview man lit a string of firecrackers and threw them under a sleeping child’s bed July 6 scaring the child. 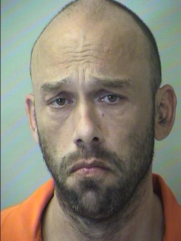 Morrison, who lived at the residence in a tent in the yard, entered the house, lit a string of firecrackers and threw it under the 9-year-old girl’s bed as a prank.

The girl was scared to the point she was crying and shaking, according to the arrest report.

Okaloosa County Sheriff’s Office deputies responded to the home on Godfrey Street where the homeowner told them Morrison went into the house without permission.

Upon hearing the explosions, the homeowner chased Morrison out of the house with a stick.

The girl told deputies she woke to the sound of fireworks exploding in her room, causing her to be frightened, cry and shake.

Morrison was permitted to use a bathroom in the house but had never been allowed inside the girl’s bedroom and had not been inside the house in about a month.

When OCSO deputies detained Morrison they found approximately two grams of methamphetamine in his pants pocket.