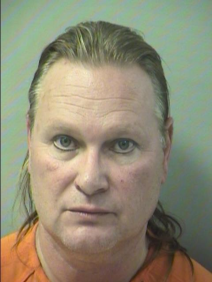 SHALIMAR, March 2, 2018–A Baker man is charged with aggravated battery with a deadly weapon for hitting his roommate in the arm with a hatchet last night.

Okaloosa County Sheriff’s Office deputies were called to a home on State Road 4 around 10 p.m.

Samuel Ray Brunson Jr., 54, got into an argument with his roommate of three weeks, 29-year-old Jake Bell, over allegations that Bell was using narcotics in Brunson’s home.

Brunson told deputies Bell had been homeless and he had given him food, clothing and a safe place to stay. However he said he could no longer live with Bell due to Bell’s disregard for Brunson and his home.

He also reported that Bell had shoved him during the argument.

Bell told deputies Brunson demanded that he leave and grabbed a hatchet.

When Bell refused to leave, Brunson hit him with it in the upper left arm, knocking him onto the couch.

Bell ran to a nearby shop and asked a clerk to call 9-1-1. He was taken to North Okaloosa Medical Center for treatment.