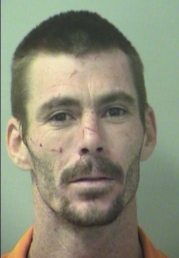 HOLT, Fla., Sept. 6, 2018—A DeFuniak Springs man was arrested after breaking into his former wife’s home in Holt today.

Brian Casey Davis, 35, was charged with felony battery and felony kidnapping, both domestic violence related, and violation of a felony parole.

According to the arrest report, sometime after 7 a.m., Davis arrived at Leslie Livingston’s home on Cooper Lane. Livingston’s two children were present along with two other people who witnessed the incident.

When Livingston refused to let Davis through the door, he climbed through a window.

Once inside, Davis grabbed Livingston by her shirt and forced her into the bedroom where they began arguing.

When Okaloosa County Sheriff’s Office deputies arrived, they heard an argument going on inside the house.

Upon entering, the deputies found Davis and Livingston in the bedroom arguing. They arrested Davis at that point, according to the arrest report.

At the time of his arrest, Davis was on felony probation for a previous charge of aggravated assault with a deadly weapon without intent to kill in Walton County.

He also was convicted of a prior battery charge in Okaloosa County in 2005.

Davis was taken to the Okaloosa Department of Corrections where he is awaiting trail without bond.

One thought on “DeFuniak man arrested for battery in Holt”