Florida was hit by four hurricanes in a six-week period in 2004. (NOAA)

WASHINGTON, Aug. 26, 2019—Florida was dubbed the “Plywood State” by media after it was battered by four hurricanes in only six weeks during the 2004 hurricane season.

Nearly every square inch of Florida felt impacts from at least one of those four storms.

National Oceanic and Atmospheric Administration’s 2004 Atlantic hurricane outlook called for an active hurricane season, and it was—15 named storms, with nine becoming hurricanes.

Four of those hurricanes—Charley, Frances, Ivan and Jeanne—took aim at Florida in quick succession.

Each one was different, yet each served as a reminder of what these storms can bring to those living or vacationing in hurricane-prone areas.

A hurricane warning extended across the entire west coast of the peninsula on the morning of Aug. 13.

But many people only paid attention to the center forecast line inside the track forecast error cone.

The cone doesn’t depict how far the storm’s impacts will be felt. High winds and heavy rain can extend hundreds of miles from the center.

That morning, the line was over the Tampa Bay region. But early that afternoon, Charley strengthened to a category 4 hurricane and veered a bit to the right, coming ashore at Punta Gorda, about 100 miles south of Tampa.

Several weeks later on Sept. 5, Hurricane Frances made landfall as a category 2 storm at Hutchinson Island on the Florida east coast.

The center of the storm was 55-to-80 miles wide at landfall, but as the calm center passed overhead it belied what was to come as Frances moved inland.

As the storm cut across the peninsula and moved on to the panhandle, it created 23 tornadoes statewide. 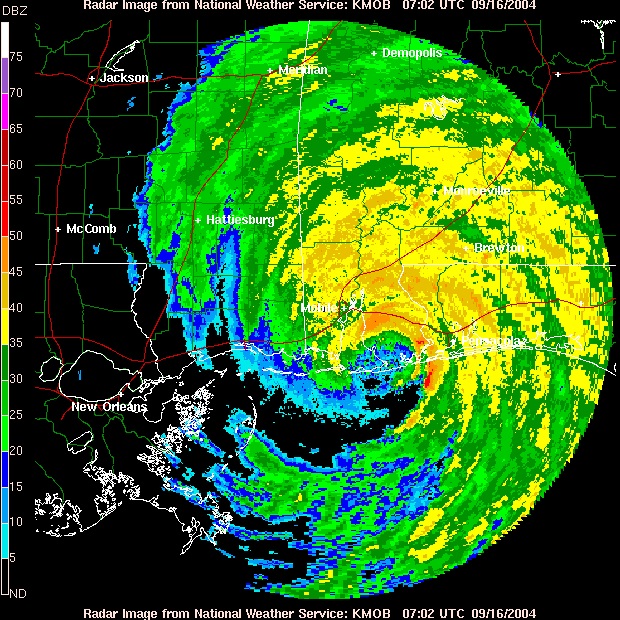 On the same day that Frances hit, Hurricane Ivan developed over the tropical Atlantic Ocean.

Portions of the Interstate 10 bridge system across Escambia Bay were severely damaged due to the severe wave action on top of the 12-foot storm surge.

Storm surge occurred all the way to Tampa Bay, about 500 miles from Ivan’s point of landfall.

Florida’s east coast was still cleaning up from Frances when it was hit again Sept. 26, this time by Hurricane Jeanne as a category 3 storm.

Its 55-mile-wide eye crossed the Florida coast at virtually the same spot where Frances did.

Widespread flooding rainfall of more than 7 inches accompanied Hurricane Jeanne as it slowly moved west and north over the state.

Florida experienced four unique storms in 2004, and though the names Charley, Frances, Ivan and Jeanne were retired by the World Meteorological Organization and will never be used again, the threats posed by each of those storms are still a factor today.