The meeting was co-hosted by Commissioner Nathan Boyles, District 3, which includes Holt, and Commissioner Graham Fountain, District 1.  Together, the commissioners represent Crestview and the surrounding area.

The focus of the meeting was traffic congestion flowing from Highway 85 into Crestview, particularly during the evening rush hour.

Not just a north county problem

“[Traffic is] no longer just an inconvenience for people in the north part of the county,” said Fountain. “It’s a public safety issue.”

Population in Okaloosa county is expected to grow from 190,800 last year to 204,400 by 2025, with much of the growth in the north end of the county, according to a study by the Florida Department of Transportation.

Additionally, the state has plans to widen Highway 85 to six lanes from Shoal River south of Crestview to Interstate 10 in the next four years, a move that will increase traffic pressure coming into the city.

That doesn’t seem to be the case anymore.

“Traffic in the Crestview area has grown exponentially in the last three-to-four years,” said Boyles. “It’s no longer a one-direction or time-of-day issue.”

Get cars off Highway 85 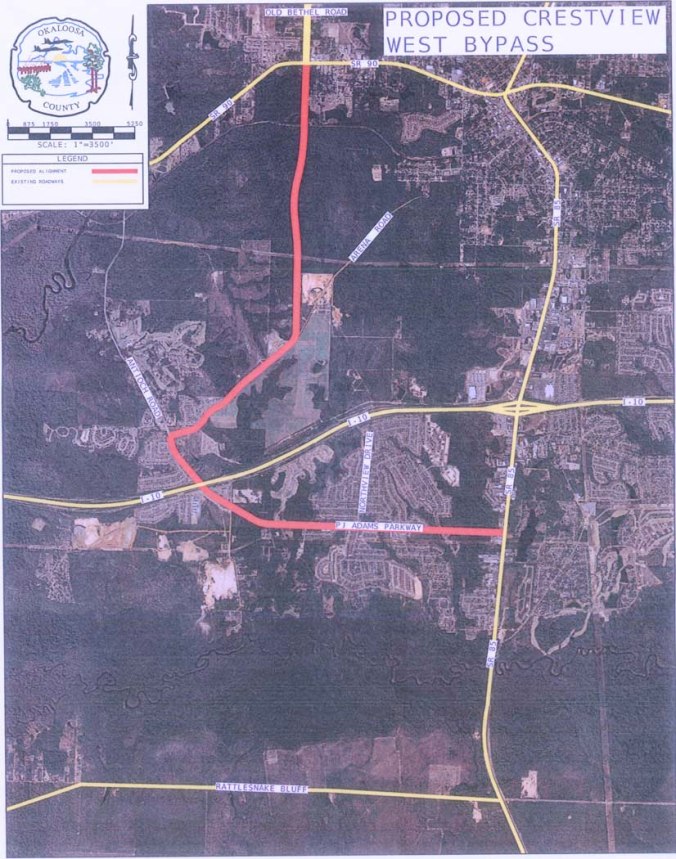 Plans are to extend PJ Adams Parkway to Arena Road (it currently ends at Antioch Road), then turn north to Enzor Road before connecting to U.S. 90 at Old Bethel Road. (diagram courtesy of Okaloosa County)

Plans are to develop an east-west connector beginning at PJ Adams Parkway and Highway 85.

The plan is to extend PJ Adams northeast to Arena Road. It currently ends at Antioch Road, a half a mile before reaching the interstate overpass.

The road will then travel northeast along Arena Road before making a north turn to connect with Enzor Road. From Enzor, the road will connect with U.S. 90 at Old Bethel Road to create a west bypass around Crestview.

However, the expense to complete a project of this magnitude adds up to $100 million, so it must be done in parts, Autrey said. The first phase is to widen PJ Adams to four lanes.

Additionally, a possible second Crestview interstate interchange where Antioch Road currently crosses is also being studied by the Florida Department of Transportation, he said.

While skeptical past congestion relief solutions would ever happen, Autrey is optimistic about some of the progress being made.

“We’ve spent a decade thinking about it,” he said.  “I have a high level of optimism we’ll see a four-lane road with a new interstate interchange. The intent is to get more cars off [Highway] 85.”

As the city grows and traffic continues to build, a circular bypass may be a solution, several meeting officials agreed.

“What Crestview needs to see is something on the order of what Dothan has,” Boyles said.

Both Dothan and Enterprise, Ala., have bypasses that encircle the cities to take traffic pressure off their primary north-south/east-west roads into the cities.

Relieving traffic pressure is key to economic growth, said Kevin Wall, Anderson Columbia president, who attended the meeting.  Anderson Columbia is the largest road builder in Florida, according to its website.

“If you want the economy to grow, you’ve got to move traffic,” he said.

However, shifting traffic east before reaching Crestview means working with Eglin Air Force Base and Duke Field. Discussions about bypassing traffic near or through Eglin property has been met with resistance in the past, said several panel members.

“Okaloosa County has got to go east and west to move traffic,” said Wall.