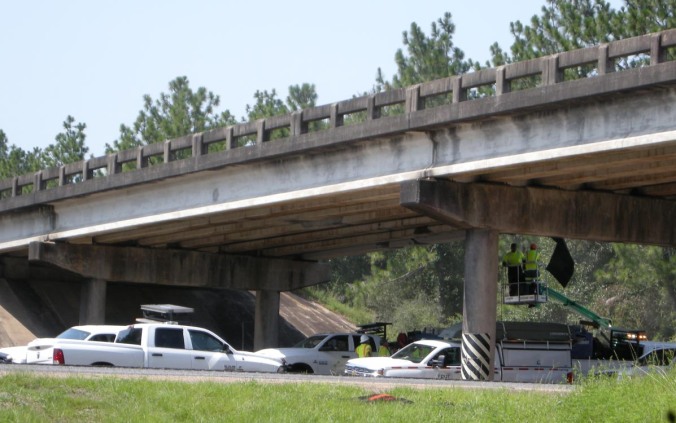 Highway workers work to inspect and repair damage done when a road construction dump truck struck the Interstate 10 overpass during the early hours of July 28.

HOLT, Fla., July 28, 2017–A dump truck hit the overpass on Interstate 10 at Wilkerson Bluff Road during the early morning hours closing the highway’s eastbound lanes for more than seven hours.

Just after 3 a.m., a road construction dump truck working on the resurfacing project on I-10 between exits 45 at Holt and 56 at Crestview hit the Wilkerson Bluff Road overpass near mile marker 50.

The driver was not hurt.

As a result of the accident, traffic was detoured north off the interstate to U.S. 90 through Holt to Florida Highway 85 in Crestview.

Increased congestion caused U.S. 90 backups as far west as Wilkerson Bluff as eastbound drivers navigated stop-and-go traffic across the Yellow River bridge to reenter the interstate at the Crestview entrance.

The bed of the dump truck was in the up position after dumping a load along the 1-10  project when it hit the overpass, according to an Okaloosa county public works employee.

The raised truck’s dump bed struck the side of the bridge. The driver continued eastbound, causing the bed to separate from the truck and embed in the roadway and into the side and underside of the bridge, according to a Florida Highway Patrol news release.

Because of the damage, both eastbound lanes of I-10 were closed. They reopened at 11:38 a.m.

The concrete guardrail on the west side of Wilkerson Bluff Road overpass was replaced after it was damaged when a dump truck hit the bridge from I-10 below.

Wilkerson Bluff Road was closed while the overpass was inspected and repaired.  The concrete guardrail on Wilkerson Bluff was damaged, but was replaced by 10 a.m.

This is not the first time the overpass has been hit by a dump truck according to the  Okaloosa county employee.

One thought on “Truck crash closes I-10 near Holt”