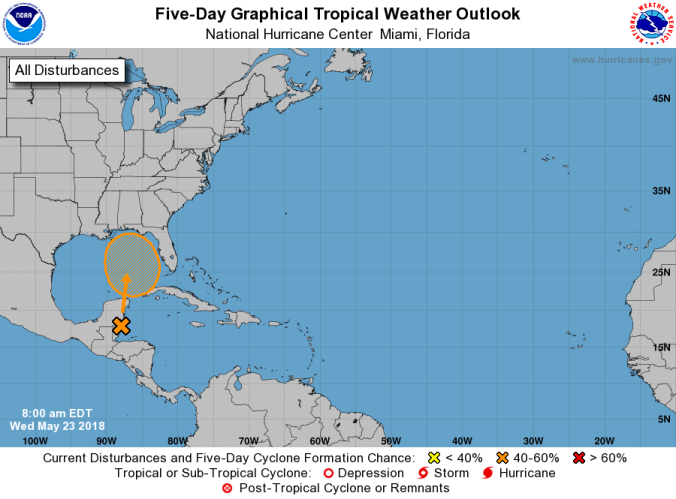 HOLT, Fla., May 23, 2018–The National Hurricane Center continues to monitor the low-pressure system in the Caribbean for potential development later this week.

A broad surface low is centered near the coast of northeastern Belize and continues to produce a large area of cloudiness and showers extending from the northwestern Caribbean Sea across Cuba and into the Florida Straits.

While little development is expected during the next couple of days due to strong upper-level winds and proximity to the Yucatan Peninsula, environmental conditions are forecast to become more conducive for development.

A subtropical or tropical depression could form this weekend over the eastern or central Gulf of Mexico, according to the NHC.

Development during the next five days has increased to 60 percent.

Regardless of development, locally heavy rainfall is possible over much of Florida and the northern Gulf Coast during the weekend.

Due to a developing area of low pressure over the central Gulf of Mexico moving northward, better coverage of showers and thunderstorms can be expected late in the week and during the weekend, according to the National Weather Service in Mobile.

With this pattern, more widespread flooding will be possible during the weekend continuing into early next week.

Damaging straightline winds and isolated tornadoes will also be possible with the stronger thunderstorms.