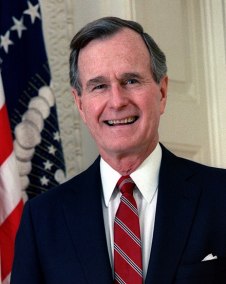 HOLT, Fla., Dec. 4, 2018–Wednesday has been designated as a national day of mourning for the passing of former President George H. W. Bush who passed away Nov. 30.

“I call on the American people to assemble on that day in their respective places of worship, there to pay homage to the memory of President George H.W. Bush,” stated President Donald Trump in his directive. “I invite the people of the world who share our grief to join us in this solemn observance.”

All federal offices will be closed tomorrow, including the Holt Post Office.

The president has directed the U.S. flag be flown at half staff here and abroad for 30 days in honor of his passing.

The state funeral will be held in Washington D.C., at 11 a.m. Wednesday at the Washington National Cathedral.

A motorcade procession will travel from the U.S. Capitol to the Washington National Cathedral through the streets of Washington ,D.C., escorted by members of the armed services.

Following the ceremony, Bush’s remains will be flown to Texas for a funeral service before being laid to rest at College Station, Texas, at his presidential library and museum.

“President George H.W. Bush led a life that exemplified what is truly great about America,” stated Trump in his formal message to Congress. “With his passing, we mark one of the last pages of a defining chapter in American history.”