So far, experts are predicting a near-normal season.

The National Oceanic and Atmospheric Association’s Climate Prediction Center is calling for nine-to-15 named storms with four-to-eight storms growing into hurricane strength and two-to-four of them becoming major 3-to-5 category storms.

This season is off and running early. There’s already had one named system, the short-lived Subtropical Storm Andrea which stayed in the Atlantic Ocean before dissipating in May.

Andrea marks the fifth year in a row a named storm formed before the official start of the hurricane season.

The low-pressure area has a 50 percent chance of further formation. (National Hurricane Center)

And The National Hurricane Center is monitoring a low-pressure area off the Yucatan Peninsula in the southwest Gulf of Mexico to welcome the new season.

If remains over water, it is forecast to become a tropical depression early next week. The next name on the 2019 hurricane list is Barry.

Florence killed 54 people and caused an estimated $24.23 billion in damages.

A month later, Michael made landfall Oct. 10 along the Panama City area as a category 5 storm with sustained winds of 160 mph. 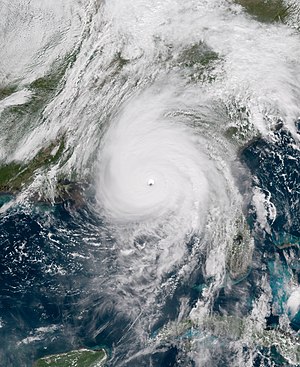 Michael killed 59 people in four states—Florida, Georgia, North Carolina and Virginia—and caused about $25 billion in damage in the United States, with another $100,000 million in Central America.

Believed to be a category 4 at landfall, Michael was upgraded this year to a category 5 storm once the final data was examined.

As a result of the toll on human life and damage caused by both storms, the names Florence and Michael have been removed from the hurricane name list.

The United States has had only four category 5 storms hit its coasts: the Labor Day storm in 1935, Camille in 1969, Andrew in 1992 and Michael last year.

Of those, three of the four made landfall in Florida. Camille hit the Mississippi Gulf Coast.

Notably, these systems were only tropical storms three days before making landfall.

To help residents prepare for the hurricane season, the state of Florida has declared the week of May 31 through June 6 as a disaster preparedness sales tax holiday.

During this time, qualifying items related to disaster preparedness are exempt from sales tax.

Although the national hurricane preparedness week was earlier in May, the National Weather Service website has a wealth of information to help get ready for the 2019 season, from planning and equipping to what to do after a storm.