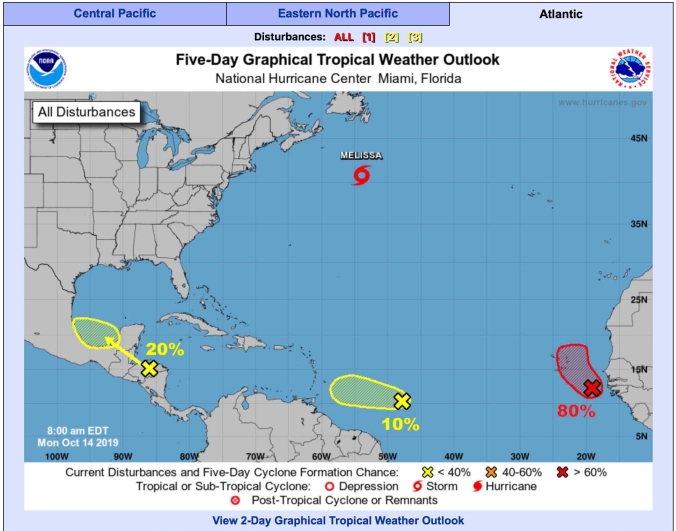 The National Hurricane Center is watching three tropical waves and one tropical storm.

A large low-pressure system is located over the far eastern tropical Atlantic Ocean off the coast of Africa about 300 miles southeast of the Cabo Verde Islands, moving slowly west-northwest.

The National Hurricane Center is forecasting for this to become a tropical depression during the next day or so as it moves closer to the islands.

During the five-day forecast period, strong upper-level winds should prevent further development, according to the NHC.

Closer to home, a low pressure area located over Central America is expected to move north-northwest across the Yucatan peninsula and into the Bay of Campeche where it could become better organized.

Finally, a third tropical wave is located over the central tropical Atlantic.

However, upper-level winds will likely prevent this area from developing further during the next couple of days.

By Wednesday as the wave approaches the Windward Islands, upper-level winds are forecast to “become quite hostile for any further development,” according to the NHC.

Hurricane season runs through Nov. 30. Although the peak of the season is winding down, late-season hurricanes are not uncommon.

Hurricane Michael struck last year on Oct. 10. Other notable late-season hurricanes were Sandy in 2012 and Matthew in 2016 which also formed in October.