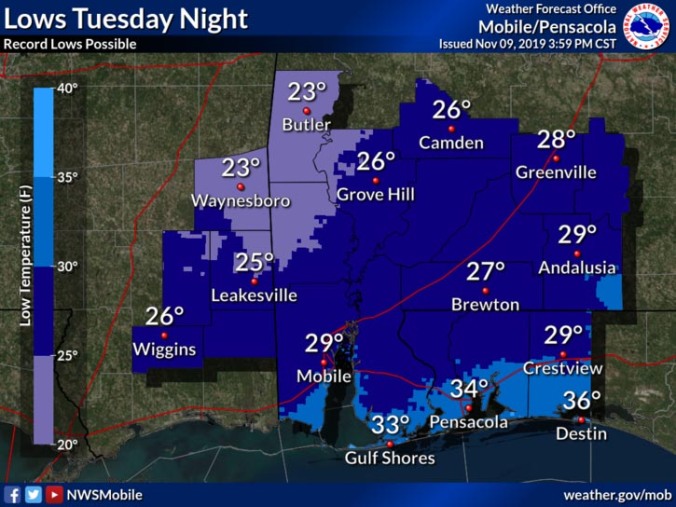 An Arctic cold front is expected to bring the coldest temperatures of the season Tuesday. (National Weather Service in Mobile)

HOLT, Fla., Nov. 10, 2019—The next surge of arctic air is poised to bring the coldest temperatures so far this season according to the National Weather Service.

The second arctic cold front in less than a week will make it feel more like the middle of January with numerous record low maximum temperatures possible.

Expect major temperature changes after mild days Sunday and Monday ahead of the cold front.

Record-breaking low temperatures bringing the first freeze of the season are possible Tuesday night, according to the NWS.

Lows are forecast to range in the 20s north of Interstate 10 and in the lower-to-mid 30s near the immediate coast.

Windy conditions of 10-to-15 mph will add to the chill Tuesday dropping the wind chill into the teens.

A freeze watch or warning will likely become necessary for essentially the entire area, according to the NWS.

Below-normal temperatures are expected to persist through the remainder of the week.