HOLT, Fla., Nov. 22, 2019–Holt Community Food Pantry patrons will have a happier Thanksgiving thanks to the generosity of the local community.

Once again, the Rotary Club of Crestview and Tiffany Woodham State Farm partnered on a Thanksgiving food drive to generate 150 dinner bags, complete with turkeys, for those who need a little extra help during the holiday.

Each meal bag included the ingredients for a complete Thanksgiving dinner.

According to Woodham, each bag costs approximately $15 each. The cost of this drive was just under $2,300 for the 150 meals. 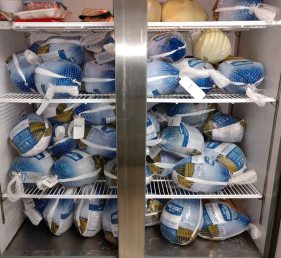 The Rotary Club and State Farm purchased the turkeys from Winn Dixie, who cut them a deal at 49 cents a pound, according to Rotary Club member Samma Brannon.

“They worked with us to give us a price we can afford,” she said. “The only way we can do these bags for $15 is if retailers work with us.”

Woodham advertised the food drive on her State Farm Facebook page, letting people know that a $15 donation will buy one meal bag.

“A man walked into the office and gave $100,” said Woodham. He walked out without giving his name.

As Brannon was filling her shopping cart with Thanksgiving meal food at Crestview’s Walmart, another man handed her $40 toward the meals, again without giving a name.

People from as far away as Belle Glade, Fla., donated to the drive, according to Woodham.

The distinctive blue bags were donated by Crestview Rehabilitation Center.

“Getting food for this time of year is of the utmost importance,” said pantry director Donna Ash. “This time of year, all food pantry organizations are under a lot of pressure to be able to feed those who need a little help.”

According to pantry co-director Jackie Tyler, almost all the food bags were handed out during the past two weeks with only a few left over.

The pantry, which is open on Wednesdays, will be closed next week for Thanksgiving.

2 thoughts on “Having a happier Thanksgiving”