An emergency call to north county fire departments went out just after noon requesting support for a house fire on L.G. Russel Road in Baker.

Minutes later, responders were alerted to shots fired in the area. 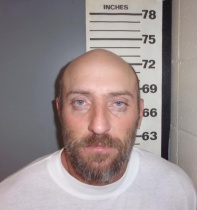 According to an Okaloosa County Sheriff’s Office news release, Baker resident Thomas Lee Findley, 40, was arrested in Covington County, Ala., after shooting at his wife of 20 years, allegedly setting his house on fire and fleeing to Alabama after making threats against family members there.

Findley has been charged with felony domestic assault here as well as felony fleeting-and-eluding and fugitive-from-justice charges in Alabama.

According to the release, his wife told the Sheriff’s Office she came home to find Findley standing in their driveway pointing a hunting-style rifle at her.

When he fired a round at her, she fled uninjured and called 911.

Findley then allegedly set fire to the home before taking off for Red Level where his wife fled to seek safety with her family, according to a Covington County Sheriff’s Department Facebook release.

Findley was gone by the time OCSO deputies arrived on scene.

Once there, deputies found the house completely engulfed in flames. The grass in the front yard was also on fire, according to the OCSO release.

Because of the incident, Baker School was placed on modified lockdown and dismissed under supervision as a precaution, according to an OCSO Facebook post.

Meanwhile, Coving County Sheriffs were informed by OCSO that Findley had obtained multiple weapons and stockpiled ammunition in his vehicle, according to the Covington County Sheriff’s Department release.

A deputy and the Red Level police chief arrived at the home to conduct a welfare check on Findley’s wife and family.

An officer made contact with Findley at a home on Gorum Bridge Road in Red Level. He was armed with a rifle and demanded that his wife come outside.

After Findley refused to obey any verbal commands, the officer fired two rounds.

Findley sped way in a Kia Optima and a high-speed chase began with speeds reaching in excess of 100 mph.

During the flight, Findley threw three rifles out of his car.

Findley is captured by Covington County Sheriff’s Department  in Alabama.

He eventually stopped and surrendered. He’s being held in Covington County Jail.

“This incident had all the ingredients for a very bad outcome,” said Covington County Sherriff Blake Thurman. “Thomas Findley made it very clear of what his intentions were when he shot at his wife in Florida and tracked her down in Red Level.”

The State Fire Marshal’s Office is investigating the fire.