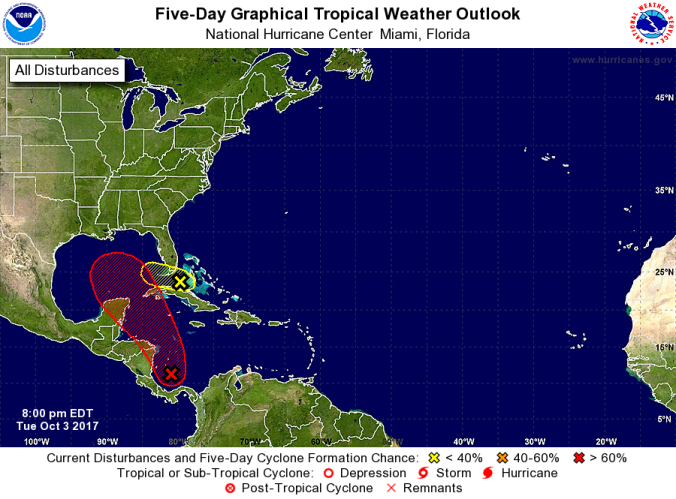 The National Hurricane Center is watching storm 90 in the southwestern Caribbean Sea as well as a low-pressure area over Cuba. (NHC)

HOLT, Fla., Oct. 3, 2017–The National Hurricane Center is watching a couple of areas in the Caribbean Sea and southwestern Atlantic Ocean.

Satellite images and surface observations indicate a broad area of low pressure has formed over the southwestern Caribbean Sea off the coast of Central America.

Environmental conditions appear generally conducive for development, and this system, now known as storm 90, could become a tropical depression within the next few days while it drifts northwestward to northward across the northwestern Caribbean and adjacent land areas and over the southern Gulf of Mexico by the weekend.

An Air Force Reserve reconnaissance aircraft is scheduled to investigate the disturbance Wednesday afternoon, if necessary.

This system is moving at 12 mph and has a 70 percent chance of further development during the next five days.

The low-pressure area located over Cuba and near the northwestern Bahamas is not expected to develop significantly because of strong upper-level winds.

However, this system is expected to produce heavy rain and gusty winds over portions of the Bahamas and Florida during the next couple of days.