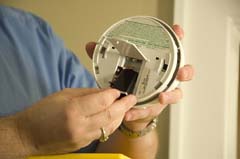 If there is not a smoke alarm present, the fire district will provide them to the home owner free of charge, said Fire Chief Scott Chestnut.

The Fire District has been running the smoke alarm replacement program for about a year, according to Chestnut.

“When we conduct an EMS call, we’ll scan the house for a detector,” he said.

If the home doesn’t have one, the responder will offer to either install one for the resident or leave it behind to be installed later, he said.

“The risk of dying in a home fire is cut in half in homes with a working smoke alarm,” according to the U.S. Fires Administration’s website. One-third of house fire deaths result from fires where no smoke alarm was present.

It only takes 30 seconds for small flame to get completely out of control and turn into a major fire, according to the USFA.

But smoke alarms require electricity to work, whether wired into the house electrical system or dependent on a battery.

According to a 2015 study by the NFPA, in fires where smoke alarms were present but did not operate, almost half of the alarms had missing or disconnected batteries.

2 thoughts on “Smoke alarms save lives”