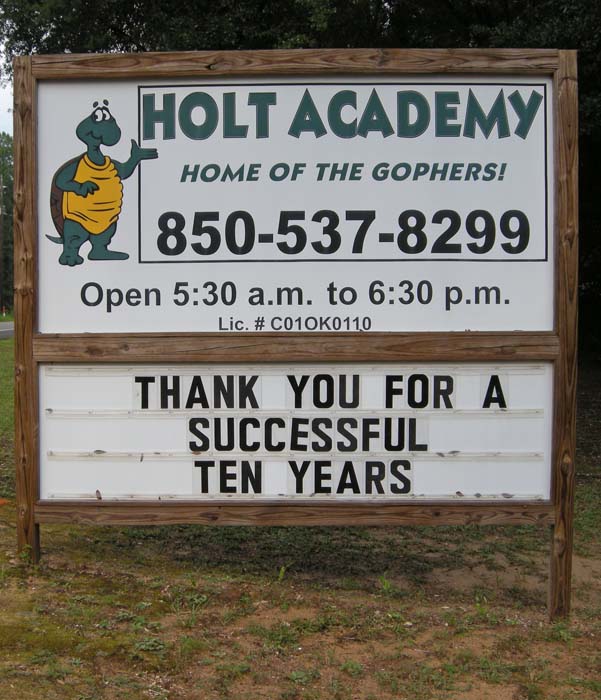 Instead, it became Holt Academy.

And it’s celebrating a decade of success.

Owners Lori Miller and Jennifer Derrick have seen a lot of change in the past 10 years, including watching their own children grow up in their facility.

When Miller and a partner opened the doors of a new child development center in Holt, it was a new venture.

Miller was building houses with her husband until the housing bubble burst in 2008.

They owned the 1.8 acres where the center now sits and decided to do something different with it.

As Miller began pulling permits to build a child care facility, officials at Okaloosa County tried to convince her to build storage units because of a storage shortage in the area, but she had a different vision.

“Some days I wish I had storage units,” Miller said with a smile. “But I thank God every day for this place.”

“It doesn’t feel like it’s been 10 years,” Miller and Derrick said. “It feels like it was yesterday.”

Early on, it was tough, according to Miller

“I prayed to God to be able to pay my next mortgage payment,” she said.

And after only three months, her original partner pulled out and left her holding the backpacks. The county threatened to shut her down if she didn’t find a qualified director.

Miller felt like her world was crashing around her.

About that time, Fred Sanford, the previous pastor of the First Baptist Church of Holt, dropped in on her and saw her struggle.

Sanford approached another Holt resident, retired principal Andy Johnson, telling him about the need for his services.

Although Johnson had 30 years of public education experience and was principle of two of Okaloosa County’s largest high schools, he wasn’t qualified to be a child care facility director. However, because of his teaching certificates, the county gave him a temporary director’s certificate pending his completion of a few courses.

“I agreed to help step in and fill in until they found someone. I stayed for five years to help find a director,” Johnson said with a laugh.

Johnson said his fondest memories were of VPK graduation, the Christmas programs and the Thanksgiving dinners.

“I’m thrilled to have worked with some of the most hard-working ladies I’ve ever worked with,” Johnson said. “They make a tremendous effort helping children.”

He returned to the Okaloosa County School District where he serves as a specialist for safety, athletics and discipline.

About six months after Miller’s partner walked out, Jennifer Derrick stepped in.  Miller and Derrick’s husbands got together and suggested the new partnership for their wives.

Derrick, who also worked at the school board until Title One funds ran out and was laid off, bought into the child care business with Miller in January 2009.

The two make a good team: Miller takes care of the administrative side of the business; Derrick concentrates on the classrooms. And the bulletin boards, something that’s just not on Miller’s radar, according to Derrick, with Miller nodding in agreement.

No two days are the same, according to the partners, and they have fond memories from the past 10 years.

“Every day is a new adventure here,” said Derrick.

“You never know what the children are going to say,” said Miller. “And there’s no secrets.”

The younger children come to school and repeat what they’ve heard or seen at home.

“I tell my teachers that it’s a two-way street–you have no secrets,” Miller said, because the children also go home and tell their parents what they’ve heard or seen at school.

As for age favorites, Derrick prefers the 18-month-old toddlers. Miller likes the three-year-olds because they talk and tell stories.

Miller’s favorite memory demonstrated the generosity of the center’s employees.

Each Christmas, the center gives back to children and families who need a little extra help. However, one year, because of unplanned expenses, there was no extra money for the holidays.

Without any prompting from Miller or Derrick, “all the employees gave from their own pockets at Christmas,” Miller said. “That’s my proudest memory.”

An added bonus of running the center meant the two moms had a ready-made place for their own children and grandchildren to grow up where they could keep an eye on them.

About the time Miller and Derrick were looking for a way to expand their business, the child development center in Baker became available earlier this year.

“We were busting at the seams,” said Miller. “The Baker location helped alleviate the overflow.”

Holt Academy Baker opened its doors in March with 10 children.

“At last count it was 44,” Miller said. She expected that number to double with VPK starting soon.

Derrick’s daughter, Hannah Lawson, is the director there. Lawson began helping out at Holt Academy as a teenager. She’s 23 now.

When the Baker facility became a reality, Lawson dug in and completed her training to become certified as a child care director and now runs the operation at Holt Academy Baker.

“None of the children are just numbers to us,” she said Miller. “We can tell you every child’s name. And their parents are like family to us.”

And it’s not about the money.

“You don’t do this to get rich,” said Miller. “You do this because of the kids.”

With that in mind, the partners are looking forward to another successful 10 years.