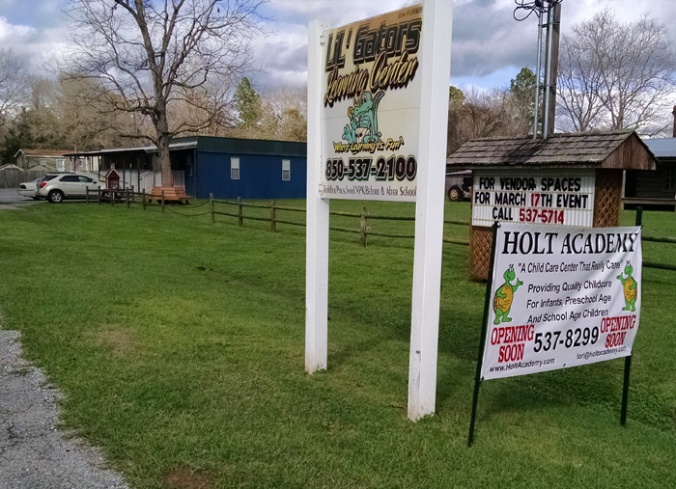 The Holt Academy Baker location is operational as of March 12.

The previous owner of Baker’s child-care facility decided she needed to spend more time with her family and closed Lil’ Gators after seven years in operation.

“Someone called and told us the facility was for sale,” said Lori Miller, co-owner of Holt Academy with Jennifer Derrick. “We saw a need in the community for kids with nowhere  else to go.”

The two were looking for a place to expand, so they decided to re-open the facility as their second Holt Academy location.

When the previous owner bowed out, Miller and Derrick stepped into a fully furnished center with little disruption.

“We rearranged the rooms like we wanted to run it more like Holt Academy and do what we do,” Miller said.

Currently, the Baker location has four employees and 20 children. Staff will be added as student enrollment grows, said Miller.

“We’re excited to get to know all the kids there,” she said.

A local private learning center in operation since 2008, the Academy has 140 children enrolled in its programs in Holt.

The center offers pre- and after-school programs, voluntary pre-kingergarten and daycare services with ages ranging from newborn through 13 years old.

The Baker location has pre- and after-school programs and VPK. Plans are to offer the same services as in Holt as Baker begins to expand, Miller said.

Holt has 40 VPK students and Baker has 20, according to Miller.

The State of Florida began offering free voluntary pre-kindergarden education in 2002 to prepare 4-year-olds for kindergarten.

Children must live in Florida and be 4 years old on or before Sept. 1 each year.

With time to enroll ending soon and spaces filling up, parents interested in this free state program are encouraged to get their VPK certificates to the Holt staff quickly.

“We need the VPK voucher form ASAP,” she said. “There’s plenty of space in Baker, but we’re filling up in both locations.”

One thought on “Holt Academy expands to Baker”