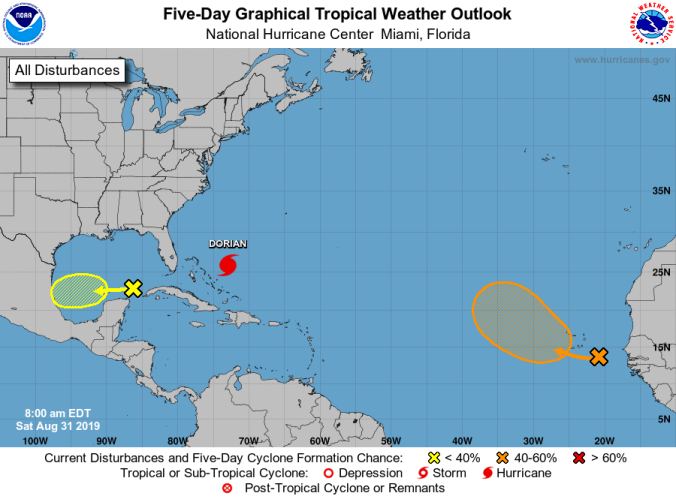 HOLT, Fla., Aug. 31, 2019–While all eyes are on Hurricane Dorian, two other developing systems have appeared.

The first tropical wave showed up yesterday with the 8 a.m. forecast update.

This wave is located about midway between the coast of Africa and the Cabo Verde Islands.

According to the National Hurricane Center, environmental conditions appear conducive for development of this system and a tropical depression could form next week while it moves across the eastern tropical Atlantic Ocean.

Should it become a named storm, the next name on the list is Fernand.

Formation chance through the next five days is medium at 60 percent.

Closer to the United States, a new area showed up with this morning’s update.

This broad area of low pressure is located over the southeastern Gulf of Mexico and is producing disorganized showers and thunderstorms.

Some gradual development of this system is possible during the next several days while it moves slowly westward across the southern and southwestern Gulf of Mexico.

Formation chance through the five-day forecast period is a low 20 percent.