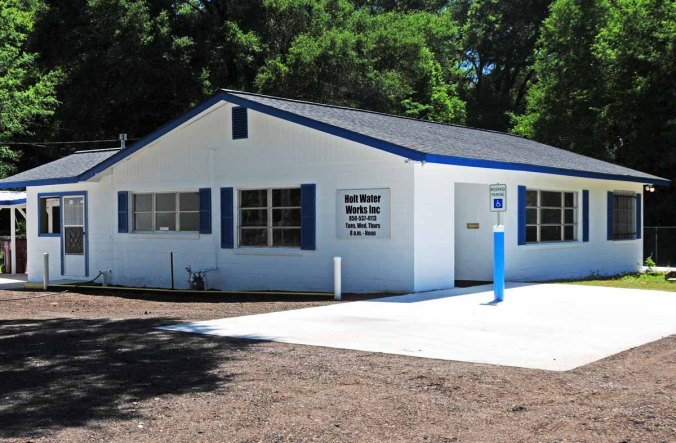 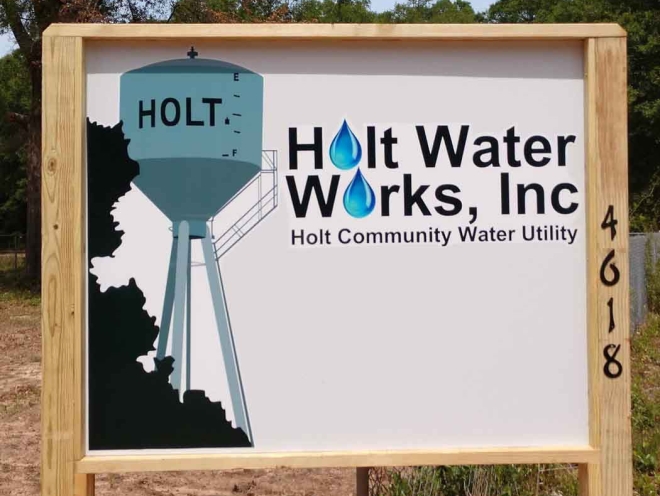 After 40-some years in the same place, Holt Water relocated its office to 4618 Johnson St., north of Cathy’s Creations.

Holt Water purchased the 1,000-square-foot concrete-block, two-bedroom Pete Parker house on Pete Parker Road in March. Because the road isn’t paved, the utility changed the address to the paved Johnson Street on the east side of the property.

The house, one of several built in the 1950s and ‘60s, is an example of the type of homes constructed by men in the Holt community, much like a traditional barn raising.

“That’s what we did back then,” said long-time resident Marvin Arnett. “We helped each other out. We built several like that.”

The Pete Parker house was refurbished inside and out.

The house was refurbished inside and out. Outside, the house and garage were power washed and given a fresh coat of paint, and a new driveway was built.

Inside, the kitchen was removed to make office space for Ash and office manager Lisa Christiansen and given a new coat of paint.

The community center, home to Holt Water and Holt Fire District, was built by the Holt Ruritan Club in the 1970s. The Ruritans were also the driving force behind the establishment of Holt Water Works in 1967.

It wasn’t until the late 1970s that Holt Water found a permanent home. As late as 1975, water customers had to go to a board member’s house to pay their bills if they didn’t want to mail them, said Ash.

Once the center was built, it was a natural fit for the water utility to have an office there, especially since Holt Water owned the property and paid the utilities at the time.

The original 10×20-foot office had paneled walls, shag carpeting and one window.

A small utilitarian 10-foot-by-20-foot office space was built on the east side of the center with a front door, a window and a door between the community center and the office.

“It had one desk, a counter, a table with four chairs, two file cabinets and an air conditioner in a hole in the wall that blew down my neck,” said Ash. “The shag carpet was a castoff donated from a board member’s office.”

The desk, an old gray-metal Army surplus castoff with drawers that screeched when tugged open, was outfitted with a bulky computer and dot-matrix printer.

The counter cut the office in half and had a swinging door for access. The walls were covered in paneling. Monthly board meetings were held around the cramped “conference” table or in the community center next door.

At the time, the office was only open to the public two days a month. Bills were painstakingly addressed to about 250 customers from handwritten ledger books, said Ash.

“We only had about 350 customers when I took over [in the early 1990s],” she said. Holt Water now serves nearly 900 customers and takes care of 63 miles of service lines.

The first thing Ash did when taking over as manager in the early 1990s was have someone cut the counter in half to make the space less constrictive and replaced the carpet with linoleum.

In 2000, another 280 square feet were added onto the back of the existing office.

As Holt Water grew, a larger office space was needed. An additional 280 square feet of work space was added to the back of the smaller office with a restroom and room to accommodate another work station as well as a 16-by16-foot conference area.

Time to move on

However, moving out of the dated community center building was a no brainer for Ash and Christiansen.

The community center complex is just that—complex. Additions of two truck bays and the water office created a patchwork of structural issues, especially along the rooflines.

Problems with water, mold, mildew and rats reached such a level, both Holt Water and Holt Fire District were forced to find new homes.

The kitchen/dining room is now the main office.

Although there had been cosmetic changes to brighten the old community center office, it was exciting to move into a freshly renovated building.

“It’s like going from black-and-white TV to color,” said Christiansen about the move. “It’s a neat, tidy, pleasant workspace.”

The new office has a reception area divided by a sliding window and will be open for customers Tuesday. Due to coronavirus restrictions, no more than two customers will be allowed at one time.

For those who want to drop off their bills, the drop box is located next to the front door on the north side of the building (railroad side).

Or better still, stop in and and say hi and check out the new digs.

“Come on in and see your new water office,” said Ash.

2 thoughts on “Holt Water moves to a new location”