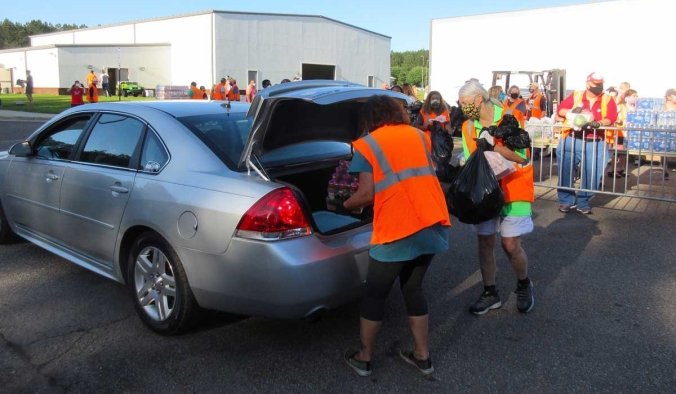 Volunteers from area churches load food into the trunk of a family’s car during the April 25 Feeding Families food distribution in Crestview. A second distribution will be May 22. (Brian Hughes)

“Even though the city is undergoing a phased reopening, we are not back to where we were in February or March,” said Crestview Mayor J.B. Whitten. “We know there are many families still struggling to make ends meet and we want to be able to help them.”

Working with the city is United Way Emerald Coast with food supplied by Feeding the Emerald Coast. Volunteers will help bag and distribute food as it is unloaded from delivery trucks.

Members of the North Okaloosa Community Emergency Response Team will be on hand to assist with logistics and traffic flow.

More than 1,100 Crestview area households received more than 60,000 pounds of groceries from Farm Share during the first food distribution in April.

Because Feeding the Emerald Coast receives some of its food from the U.S. Department of Agriculture, volunteers will be collecting basic data about food recipients, including names, addresses and the ages of household members.

Participants’ vehicles will line up on eastbound Commerce Drive and will be routed to staging areas on the north side of the Community Center and the south side of the Crestview Public Library.

Any backed-up traffic will line up south of the Commerce Drive intersection on Industrial Drive.

Provision will be made to access the Hancock Whitney Bank, the U.S. Post Office and the Retina Specialty Institute.

Food will be distributed until the supplies run out.