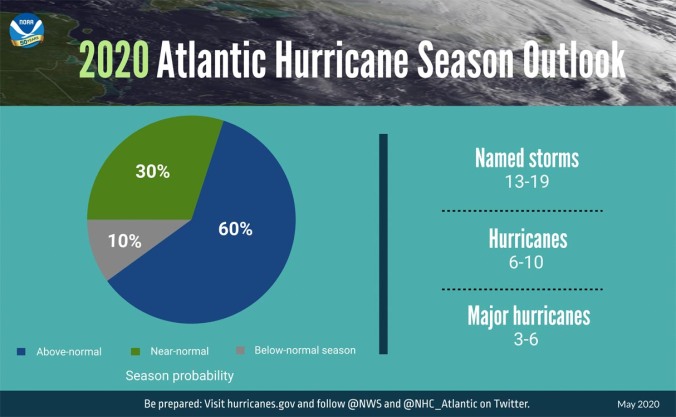 May 22, 2020, Washington—Just about every weather organization is predicting an above-normal hurricane season this year.

It has already kicked off with Tropical Storm Arthur spinning up 15 days before the official June 1 seasonal start.

Forecasters with the National Oceanic and Atmospheric Administration’s Climate Prediction Center, a division of the National Weather service, are predicting an above-normal 2020 Atlantic hurricane season.

The administration’s CPC is forecasting a likely range of 13 to 19 named storms (winds of 39 mph or higher).

By comparison, Colorado State University’s Department of Atmospheric Science has narrowed it down to 16 named storms, eight hurricanes and four major storms of a category 3 or stronger.

Their prediction goes on to state the probability of a major storm hitting the Gulf Coast from the panhandle to Brownsville, Texas, is 44 percent, up from 30 percent for the last half century.

A study released Monday suggests climate change is responsible for stronger hurricanes and that storm intensities have been increasing by 8 percent per decade in the 39-year period between 1979 to 2017.

The combination of several climate factors is driving the strong likelihood for above-normal activity in the Atlantic this year.

El Nino conditions are expected to either remain neutral or to trend toward La Nina, meaning there will not be an El Nino present to suppress hurricane activity.

As with every hurricane season, the need to be prepared is critically important this year.

“Social distancing and other CDC guidance to keep you safe from COVID-19 may impact the disaster preparedness plan you had in place, including what is in your go-kit, evacuation routes, shelters and more. With tornado season at its peak, hurricane season around the corner and flooding, earthquakes and wildfires a risk year-round, it is time to revise and adjust your emergency plan now,” said Carlos Castillo, acting deputy administrator for resilience at FEMA. “Natural disasters won’t wait, so I encourage you to keep COVID-19 in mind when revising or making your plan for you and your loved ones, and don’t forget your pets.”

NOAA’s outlook is for overall seasonal activity and is not a landfall forecast. The Climate Prediction Center and CSU’s Department of Atmospheric Science will update their 2020 Atlantic seasonal outlook prior to September’s historical peak of the season.

The Atlantic hurricane season runs from June 1 through November 30.