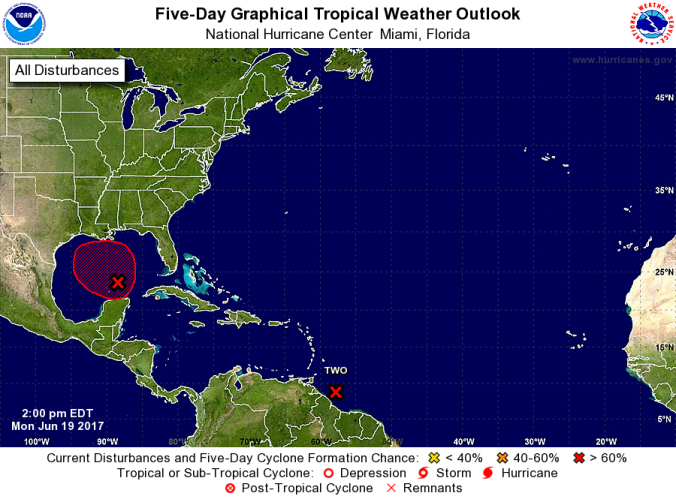 The storm system is now in the Gulf of Mexico. (illustration courtesy of the National Hurricane Center)

HOLT, Fla., June 19, 2017–The low-pressure system has crossed the Yucatan Peninsula and moved into the Gulf of Mexico.

While this system does not have a well-defined surface circulation, satellite wind data indicate that tropical-storm-force winds are occurring in a band 100 to 150 miles
northeast of the broad low.

Upper-level winds are expected to be marginally conducive for some additional development of this system during the next day or two while it moves northward to northwestward into the central Gulf of Mexico, and a tropical or subtropical cyclone is likely to form during that time.

interests along the U.S. Gulf Coast from the central Texas coast to the western Florida panhandle should monitor progress of this system, as a tropical storm watch or  warning could be issued for portions of this area later today.

An Air Force Reserve Hurricane Hunter aircraft is scheduled to investigate this system this afternoon.