Chopped romaine lettuce from the Yuma, Ariz., growing region has been identified as the source of an E. coli outbreak across the nation. (Center for Disease Control)

HOLT, Fla., April 14, 2018–Chopped romaine lettuce from Arizona could be contaminated with E. coli bacteria according to the Center for Disease Control and Prevention in Atlanta.

As of April 12, 35 people from 11 states have been reportedly infected with the E. coli outbreak strain. Of those, 22 have been hospitalized, including three people who have developed a type of kidney failure called hemolytic uremic syndrome.

No deaths have been reported at this time. 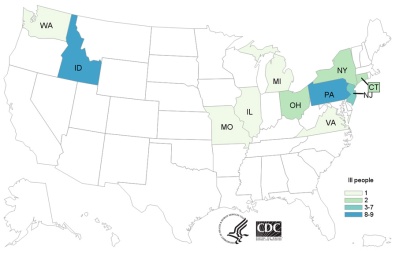 No infections have been reported from the southern United States.

Information collected indicates that chopped romaine lettuce from the Yuma, Ariz., growing region as the source of what is making people sick in areas across the United States.

No common grower, supplier, distributor or brand has been identified at this time, according to the CDC.

Illnesses occurring after March 27 might not yet be reported due to the time it takes between when a person becomes ill with E. coli and when the illness is reported, which takes an average of two-to-three weeks.

Advice from the center goes on to say consumers should confirm romaine lettuce in stores or from restaurants is not chopped romaine from the Yuma region before buying or eating it.

The investigation is ongoing and the CDC will provide updates when more information is available.