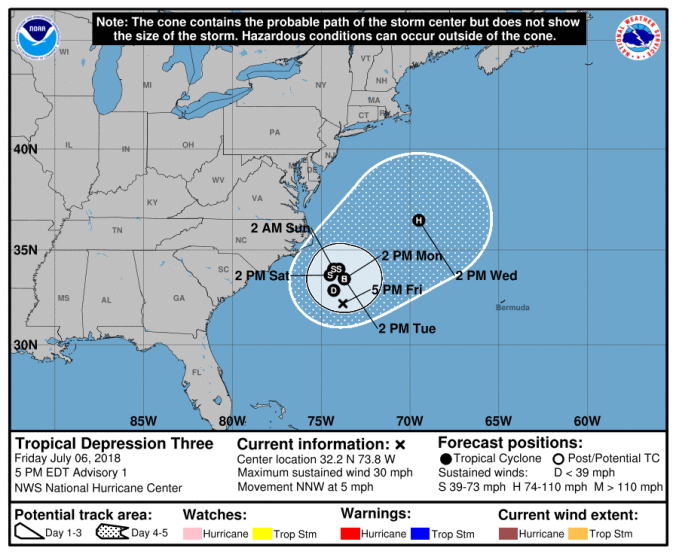 Tropical Depression Three is off the coast of North Carolina. (National Hurricane Center)

HOLT, Fla., July 6, 2018–The system off the east coast of the United States has developed into a tropical depression.

Located well off the North Carolina Coast, Tropical Depression Three is expected to remain offshore, according to the National Hurricane Center.

Moving toward the north-northwest near 5 mph, the NHC expects the depression to slow down and meander well offshore through Monday.

The depression, moving over warm waters and in a low-shear environment, is forecast to become a tropical storm Saturday, with gradual strengthening expected through Monday.

Additional intensification could occur by the end of the forecast period when the system moves northeast away from the U.S coast and interacts with a mid-level trough.

Hurricane modeling suggests tropical-storm-force winds associated with the system will occur in the eastern quadrant well away from the U.S. coast. On this basis, no watches or warnings are required for the U.S coast at this time

A reconnaissance plane is scheduled to investigate the system Saturday. 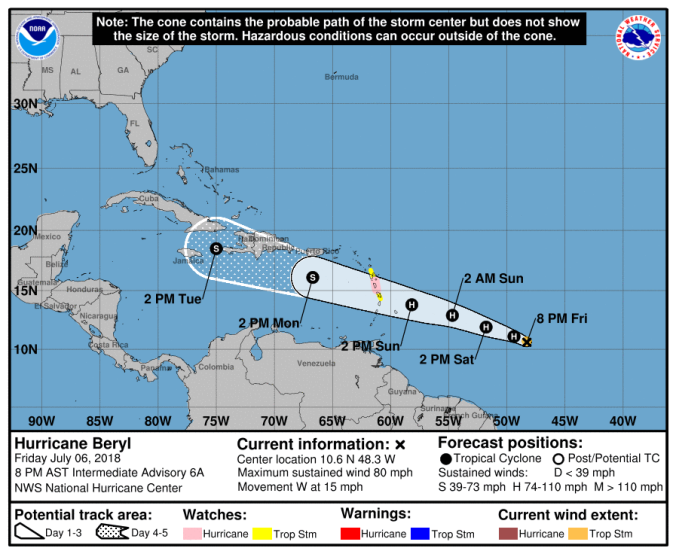 Hurricane Beryl is expected to reach the Caribbean Sea Monday where it will begin to dissipate. (NHC)

Meanwhile Hurricane Beryl is moving toward the west near 15 mph.

A faster west-to-west-northwest motion is expected to begin during the weekend and
continue through early next week.

On the forecast track, the center of Beryl will approach the Lesser Antilles during the weekend and cross the island chain late Sunday or Monday.

Maximum sustained winds are near 80 mph with higher gusts.

Some strengthening is forecast during the next couple of days, and Beryl could still be a hurricane when it reaches the Lesser Antilles late Sunday or Monday, according to the NHC.

Weakening is expected once Beryl reaches the eastern Caribbean Sea Monday, but the system may not degenerate into an open trough until it reaches the vicinity of Hispaniola and the central Caribbean Sea.