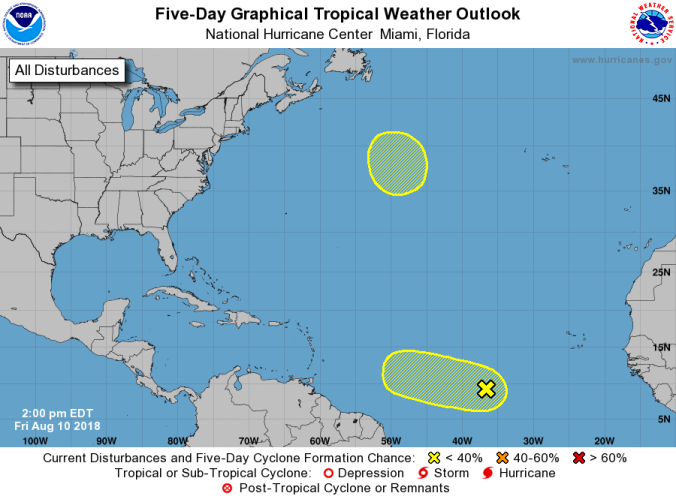 HOLT, Fla., Aug. 10, 2018–An area of disturbed weather has appeared in the Atlantic Ocean about halfway between Africa and the Lesser Antilles.

Cooler Atlantic sea temperatures, wind shear and dry Saharan air coming off the African coast has resulted in a quiet season so far leading up to the traditional peak, which generally runs from mid Atlantic through the end of October.

Strong upper-level winds associated with the tropical Atlantic area are likely to limit development of this system for the next day or two, according to the National Hurricane Center.

However, some gradual development is possible while the system moves slowly westward through early next week.

Formation chance through the next 48 hours is low, but increases during the next five days to 20 percent.

Further north, a non-tropical area of low pressure is forecast to form over the central Atlantic in a few days.

The low could gradually acquire subtropical or tropical characteristics while moving slowly northeastward for couple of days, according to the NHC.

This system also has a 20 percent chance of further formation during the next five days.