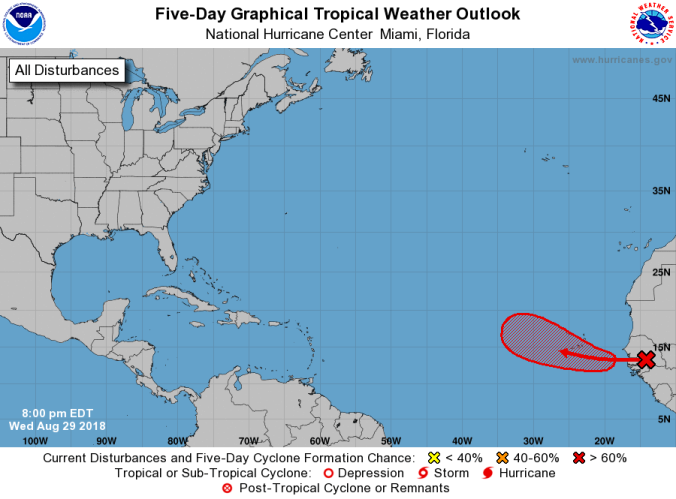 HOLT, Fla., Aug. 29, 2018–The tropical wave expected off the coast of Africa is forecast to develop once it enters the Atlantic Ocean.

According to the National Hurricane Center, a vigorous low-pressure area associated with the wave is forecast to form between the coast of Africa and the Cabo Verde Islands Thursday.

Conditions appears to be favorable for subsequent additional development and a tropical depression is likely to form by the weekend while the system moves west or west-northwest near the Cabo Verde Islands and the adjacent Atlantic.

Should a tropical depression develop, it will become only the sixth system of the 2018 Atlantic season compared to the 14 named storms so far in the Pacific with a 15th possibly developing behind Hurricane Norman.

Hurricane models predict environmental conditions to cause this system to eventually turn to the northeast and remain in the Atlantic away from the United States.

Until then, the system is expected to bring rains and gusty winds to the Cabo Verde Islands in two or three days and interests in that region should monitor the progress of this disturbance.

Formation chance through the next five days is now high at 70 percent.