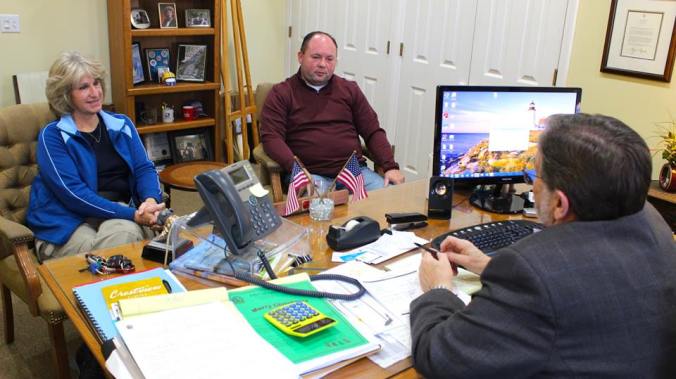 At the same time, Cadle appointed Officer Lisa Sprague, the department’s former records custodian and current director of professional standards and ethics, to the position of deputy chief of police.

“For the past seven months I have watched the police department under the direction of interim Chief Grant and have been very pleased to witness the agency’s morale rise to a new, extremely positive level,” Cadle said.

Grant, a 28-year veteran of the Crestview Police Department, is a Crestview High School graduate who rose from auxiliary police officer to full-time patrol officer and progressed through the ranks, including the agency’s first K9 handler.

Grant was appointed interim chief after former Chief Tony Taylor’s suspension in May and became deputy chief with the retirement in June of former Deputy Chief Rick Brown.

“He knows and understands the demands of this department from top to bottom,” Cadle said.

“He realized the concerns of downtown merchants over the issue of harassment of customers by vagrant and possibly homeless people, as well as drug usage,” Cadle said. “He immediately installed a full-time officer to that area who was met with an overwhelmingly positive response from downtown merchants.”

In announcing Sprague’s appointment as deputy chief, Cadle cited her extensive, 38-year law enforcement career as a determining factor in selecting her for the position now vacated by Grant.

She served as associate chief of police at Florida State University from 2003-10, serving its 52,000-person population.

At Florida Gateway College in Tallahassee, she was director of public safety and an adjunct professor of criminal justice.

Sprague also holds a black belt in Tae Kwon Do.

“At Crestview PD, she has succeeded far beyond our expectations,” Cadle said. “Dep. Chief Sprague has a long history in law enforcement with full certification in numerous areas of police work. She brings an expertise in modern law enforcement that will be invaluable to our police department.”

The mayor said his decision to appoint the new Crestview Police leadership was not undertaken lightly and was done with considerable deliberation, thought, consultation and prayer, but after the multi-month process, he is confident in his selections.

“Both Chief Grant and Deputy Chief Sprague are well-respected in our Police Department and in our community,” Cadle said. “Their leadership skills and experience will serve our city well.”

They will be formally introduced to the community at the Crestview City Council meeting Monday at 6 p.m.

The public is invited to meet Crestview Police Chief Jamie Grant and Deputy Chief Lisa Sprague during Coffee With a Cop Dec. 12 from 8 to 10 a.m. at Comfort Inn & Suites, 900 Southcrest Dr. (behind Wendy’s). Coffee, waffles, continental breakfast treats and conversation are free.