WASHINGTON, MAY 25, 2019–The National Oceanic and Atmospheric Administration’s Climate Prediction Center is predicting a near-normal Atlantic hurricane season this year. 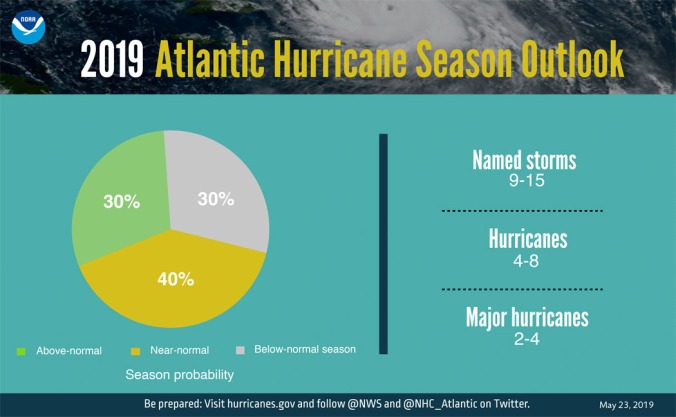 For 2019, NOAA predicts a likely range of nine-to-15 named storms with winds of 39 mph or higher. Of those, four-to-eight could become hurricanes (winds of 74 mph or higher).

Of those hurricanes, two-to-four could become major hurricanes,  a category 3, 4 or 5 with winds of 111 mph or higher.

This outlook reflects competing climate factors, according to NOAA.

The ongoing El Nino is expected to persist and suppress the intensity of the hurricane season.

Countering El Nino is the expected combination of warmer-than-average sea-surface temperatures in the tropical Atlantic Ocean and Caribbean Sea and an enhanced west African monsoon, both of which favor increased hurricane activity.

NOAA’s outlook is for overall seasonal activity and is not a landfall forecast.

The hurricane season officially extends from June 1 to November 30.

NOAA’s Climate Prediction Center will update the 2019 Atlantic seasonal outlook in August just prior to the historical peak of the season.