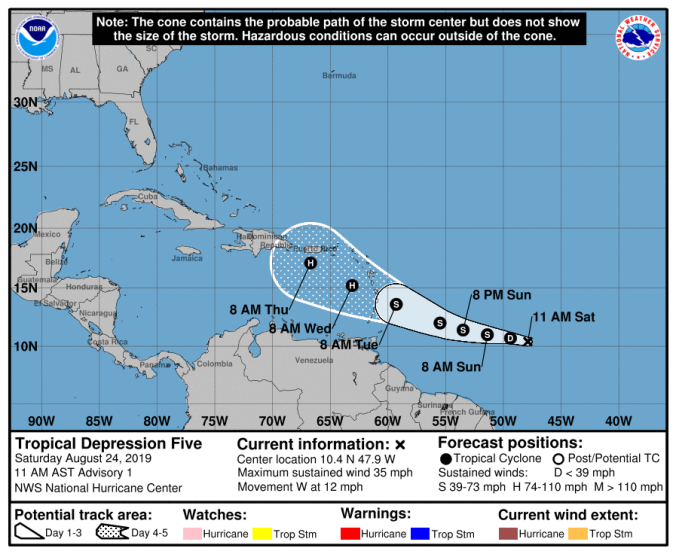 HOLT, Fla., Aug. 24, 2019—Tropical Depression 5 formed in the Atlantic Ocean and a low-pressure area popped up in the Gulf of Mexico off the coast of Texas this afternoon.

The small low-pressure system the National Hurricane Center has been tracking in the tropical Atlantic the past few days acquired enough deep convection to be classified  as Tropical Depression 5.

Gradual strengthening is forecast during the next few days and TD 5 is forecast to become a tropical storm later tonight or Sunday. The next name on the hurricane list is Dorian.

The depression is moving toward the west near 12 mph and is expected to continue on this track today, according to the NHC.

A turn toward the west-northwest is forecast for Sunday through Tuesday and is expected to be near the central Lesser Antilles Tuesday.

It’s forecast to track into the northeastern Caribbean Sea Wednesday and Thursday.

The NHC is now forecasting the depression to become a tropical storm by Sunday morning and a hurricane by Wednesday morning.

Maximum sustained winds are near 35 mph with higher gusts. 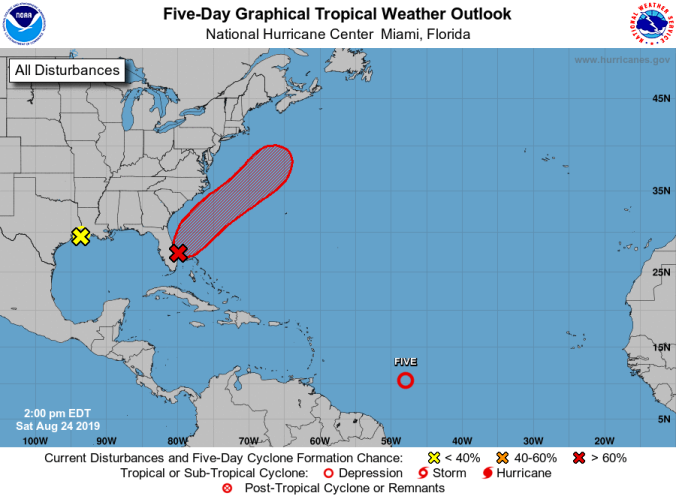 There’s been no changes to the forecast for Invest 98 just off Florida’s southern peninsula.

Formation chances are high at 90 percent during the forecast period and a named storm is likely to form early next week, according to the NHC.

The NHC is also watching a low-pressure area located near the upper Texas and southwestern Louisiana coasts.

According to the NHC, associated shower and thunderstorm activity shows signs of organization; however, the system is unlikely to move inland before a tropical system can occur.