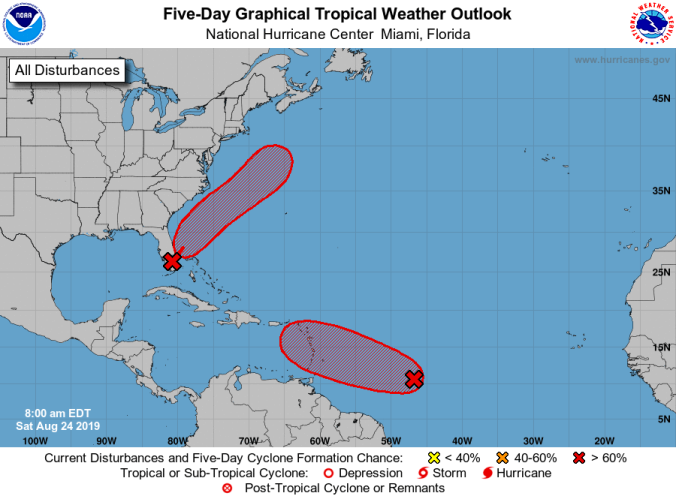 HOLT, Fla., Aug. 24, 2019—Two low-pressure areas in the Atlantic are now expected to develop into tropical systems within the next few days.

Neither pose a hurricane threat to the Florida panhandle at this time.

A broad area of low pressure located over inland Florida is producing a large area of disorganized showers and thunderstorms extending eastward over the northwest Bahamas.

Significant development of this low is unlikely today, according to the National Hurricane Center; however, environmental conditions appear favorable for gradual development once it moves offshore over the eastern Atlantic by Sunday.

A tropical or subtropical depression is likely to form early next week while the system moves northeast offshore of the southeastern U.S. coast, according to the NHC.

While an Air Force Reserve Hurricane Hunter mission scheduled to investigate the system this afternoon could be postponed if the center of the low remains inland, another mission is scheduled for Sunday.

Formation chances through the next five days is high at 90 percent.

The low-pressure system merging with a tropical wave east of the Windward Islands is showing some signs of organization, according to the NHC.

As with the system over inland Florida, environmental conditions appear likely for additional development during the forecast period.

The NHC expects a tropical depression to form during the next day or two while it moves west-to-northwest at 10-to-15 mph.

However, conditions appear less favorable for development when the low reaches the Lesser Antilles and eastern Caribbean Sea by the middle of next week, according to the NHC.

Finally, Tropical Depression Chantal has disappeared over the northeast Atlantic.