CRESTVIEW, Fla., Aug. 30, 2019—The Crestview man suspected in the July murder of another Crestview man has been apprehended in Georgia. 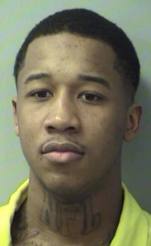 Tony Jerome Byrd, 21, was arrested in Atlanta today by the U.S. Marshalls Office.

Byrd is the primary suspect of the murder of Tywon C. Tatum, 32, July 8.

Byrd, who was considered armed and dangerous, was in possession of a firearm at the time of his arrest.

The weapon does not appear to be the murder weapon, but an analysis will be done for a nationwide comparison for connection in any other cases, according to a news release by the Crestview Police Department.

Byrd will remain incarcerated in Atlanta until his extradition back to Okaloosa County can be coordinated.

Once he has been delivered into the custody of the Okaloosa County Jail, he will remain there without bond.

“We have good reason to be very proud of the men and women of the Crestview Police Department,” said Crestview Police Chief Stephen McCosker. “Officers and investigators worked in conjunction with the Okaloosa County Sheriff’s Office, the Florida Department of Law Enforcement and the United States Marshals Office, both in northwest Florida and the Atlanta area, and dedicated countless hours to investigating this murder.

“They tirelessly followed every lead in this case and their diligence ultimately allowed for the swift apprehension of Mr. Byrd,” he said.