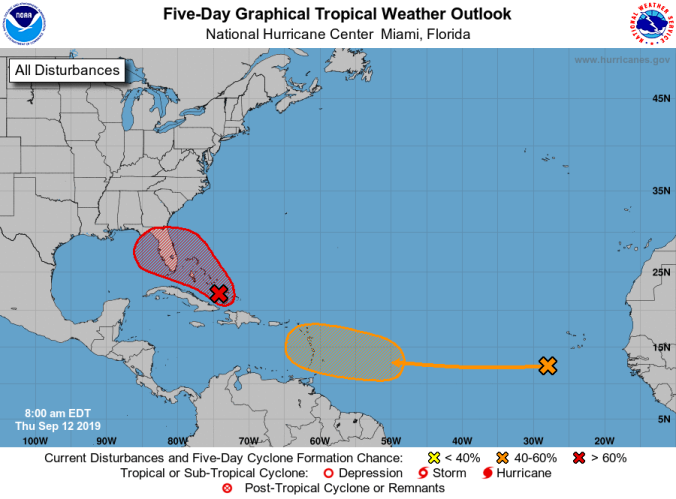 HOLT, Fla., Sept. 12, 2019—The National Hurricane Center is prepared to issue a tropical advisory for the low-pressure system located over the Bahamas later today.

Satellite images indicate the area over the central and southeastern Bahamas is gradually becoming better organized.

Conditions are becoming favorable for a tropical depression or a tropical storm to form within the next day or so, according to the NHC.

This will be storm number nine of the 2019 season.

The system is moving northwest through the northwestern Bahamas and toward the Florida peninsula at 5-to-10 mph.

This disturbance will bring heavy rainfall and gusty winds across portions of the islands through Friday, especially in portions of the northwestern Bahamas affected by Hurricane Dorian.

An Air Force Reserve reconnaissance aircraft is scheduled to investigate the system this afternoon, if necessary.

Much further to the east, the tropical wave located several hundred miles west of the Cabo Verde Islands appears to be in an area favorable for development.

The NHC is looking for it to become a tropical depression early next week as it moves westward over the tropical Atlantic.

It now has a 40 percent chance to grow into a tropical system.