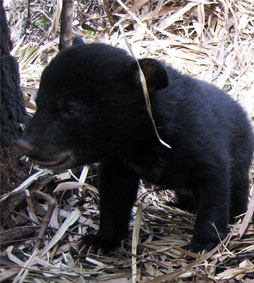 Holt resident Pam Wilson spotted a mother with two small cubs foraging for food and wants other residents to be aware of the animals.

“My young son opened our backdoor yesterday evening around 6 p.m. and the mamma was right by my steps and stood up on her hind legs,” she said.

The bears were looking for food, she said.

“Her two cubs were trying to climb one of my pine trees, but kept slipping down,” said Wilson.

According to the Florida Fish and Wildlife Conservation Commission, bears are driven by their need to eat. They follow their noses and can smell food odors up to a mile away.

Black bears can make a meal out of birdseed. Florida Fish and Wildlife Conservation Commission

Although black bears are normally too shy to risk contact with humans, their powerful need to find food can overwhelm this fear, according to the Fish and Wildlife website.

According to Fish and Wildlife, after awhile, bears become “habituated” by gradually losing fear of humans and will often return to areas with accessible food.

Once bears lose their natural fear of people, there is often little hope to make the bear wild again, according to the website.

Holt is one of many rural Okaloosa County communities where bears are spotted, especially since it’s close to the Eglin Air Force Base range.

“They live here too, but I don’t want any kids, or anyone, for that matter, to get hurt,” Wilson said.