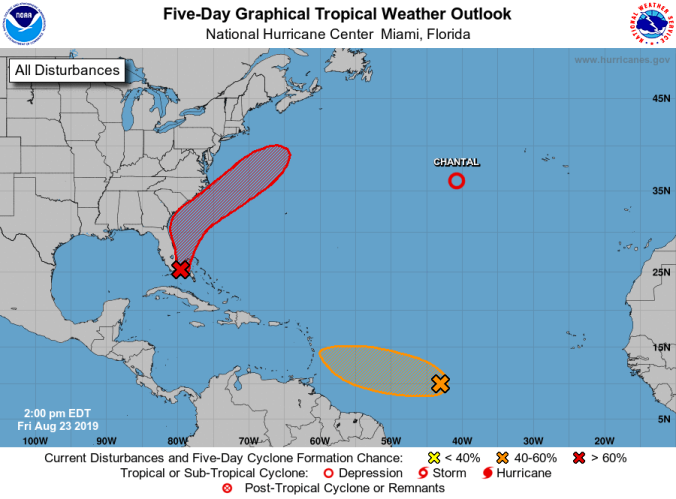 Tropical Depression Chantal is expected to decay into a remnant low-pressure area this evening, according to the NHC.

Closer to home, the NHC is forecasting the low-pressure system now just east of southeastern Florida to become a tropical depression by Saturday, if the current trend continues.

This system is becoming better organized and is forecast to move generally northwest near or over the eastern Florida peninsula through tonight and then move north-to-northeast over the Atlantic near the east coast of the central Florida peninsula Saturday.

After that, it’s expected to move northeast offshore of the southeastern U.S. coast from east-central Florida to North Carolina through early next week.

An Air Force Reserve Hurricane Hunter aircraft is scheduled to investigate the system Saturday, if necessary.

Further to the east in the Atlantic, satellite wind data indicate a low-pressure area that’s formed with a tropical wave located about 1,300 miles east-southeast of the Windward Islands.

Additional development of this system is possible as it moves west to west-northwest at 15 mph during the next few days.

A tropical depression is could form late this weekend or early next week, according to the NHC.

Formation chance through the five-day forecast period is at 50 percent.